Harvest came  early at St James this year and the yokels turned out in force for the Harvest Supper on 12th September. An unruly crowd of nearly sixty enjoyed a  ploughman’s supper followed by apple pie and cream. A hush descended over the meal as brains were engaged in attempting two of celebrated quiz master Mike Blackmun’s challenges: the identification from photos of different harvesting machines and the types of cake from recipes.

Then, the moment everyone was waiting for – the award of prizes for the St James Bake-Off competition. Ten delicious cakes had made the final and what a tasty display we saw – fruit cakes, chocolate cakes, sponges, all beautifully baked, with not a soggy bottom in sight. The overall winner was Eloise Rimmer, but mention should also be made of the class winners  – Amy Lockwood,  Chris Rimmer, and Janet Akehurst. Thanks go to Cara Thomas who judged the cakes and had the enviable task of sampling each one.

The cakes needed deserving homes to go to, so up stepped quiz master Mike Blackmun to act as auctioneer. A lively auction ensued, and special mention must be made of Virginia Patterson, who bid for every cake but ended up cakeless!  Warming to his new role, Mike then auctioned several vases of flowers, which meant that a total of £76 was raised for the roof fund through the auctions.

Big thanks go to Irene Parker, who organised the event, and set up a raffle which raised £72, and to Sue Karsten, Alison Mullens and Jackie Turton, who prepared the delicious food. The grand total raised by the sale of tickets, the auctions and the raffle came to £298. Well done all! 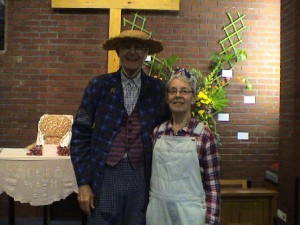