On the 20th September a number of people from St James went over to Oxford for the Oxford Diocese ‘Grand Day Out’.

The puppets along with their puppeteers had been given an invitation to be part of the big day. From all accounts they worked hard on the day.

Nine of us chose to get to Earley station for the 8.35 train (whilst others chose to drive). After reaching Oxford and saying goodbye to a mum and her young daughter, who were going straight to the Children’s activities, the rest of us made our way to Christchurch Meadow, just in time for the opening worship. Now where else could you find 4 Bishops!!

What else did we get up to?

A number of us went to hear Mary Berry being interviewed by Bishop John. No we didn’t get to hear who had won ‘The Great British Bake off’!! Others found their way to the ‘Encountering God’ event which involved a variety of prayer stations during the day. In the afternoon, one of our children was found rushing off to the Mad Hatter’s tea-party. 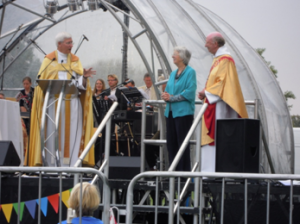 The day was concluded by a service of Eucharist on Christ Church Meadows. There appeared to be about a 1000 people on the field, all worshipping together and sharing the Eucharist, as well as joining in with a large open air ‘thank you’ to Bishop John as he approaches retirement.