The congregation met in a local school from November 1969 until February 1974 when we were blessed by the opening of the purpose built church centre building . 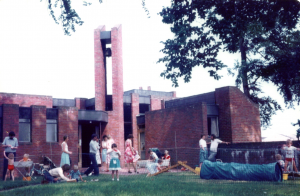 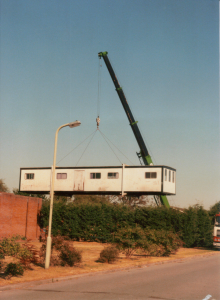 At this time St James was part of the parish of St John the Evangelist, Woodley. As the congregation grew the need for an extension to the building became necessary and this was completed in 1984.  Even with an enlarged building we soon realised we were short of space and used a large portacabin in the car park for our children’s work. 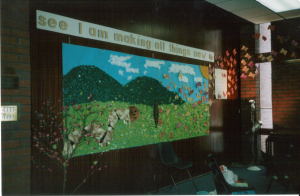 With the continuing growth of the congregation we required a further extension in 1991 to increase the size of the worship area  and provide better facilities for the congregations and other groups who were making use of the church centre,  including a lounge which doubles up as space for children’s work. During the building work we had to move out of the building and when we returned it was not only to a new building but with the desire to use it in new and different ways.

In 1992 St James became a parish within the newly formed Woodley Team Ministry; and since 2009 has been the Benefice of Southlake St James in the newly created Group Ministry of Woodley.

On April 1st 2012 changes in the ecclesiastical boundaries of Woodley came into effect, with the new Benefice of Southlake St James covering the southern half of the town. Emmanuel Church was part of the benefice with its own area of pastoral responsibility. In 2018 further re-organisation and parish boundary changes took place and Emmanuel Church became a parish in its own right. With those boundary changes one of the areas gained by St James was the Woodley Shopping Precinct.

To read more about our first 50 years click here.